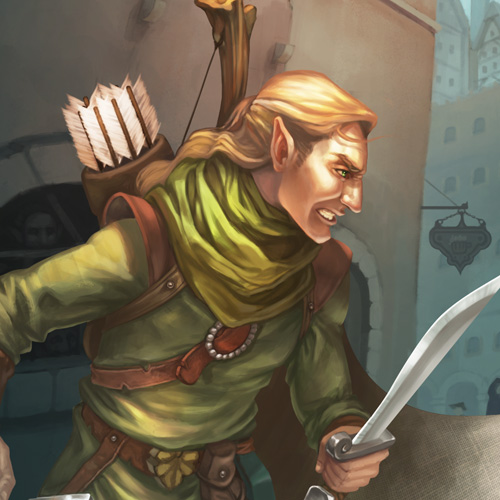 Elves are considered to be a mysterious and peaceful race that doesn’t engage in open wars and conflicts. They value stability and honour, which has been cultivated for many generations. However, like the High Elves or Dark Elves of Sarhea, they can show aggression and bravery in which, like all Elves, they hold their ground, but only Greenskins may go up against them. In times of dark prehistory, Elves accompanied Humans from the central lands and served them as a submissive race of hunters, but over the centuries they gained independence and strength to break free from the yoke of Humans.

Their oppressors started to lapse into the depths of the bloody wars they waged against Gnomes and Goblins, which allowed Elves to choose the first Elfarion who led the rebels to fight for freedom. Humans have always been betrayers, so when they were betrayed themselves, they wanted to make bloody revenge to give others an example of how they treat the traitors of their ancient race.

The elven race was too weak to stand up to the mighty army alone, but the first Elfarion was not only a great strategist but also a cunning diplomat. He offered to help the Gnomes defeat Humans, and responded to the whispering god of wilds, Ern, promising him his eternal ministry and creating forest temples for his followers in exchange for his divine favour. The blessing that the young race received from her new god has gone beyond the wildest dreams of Elfarion.

His warriors were now much more dangerous in the woods that concealed them like a dark aura, and every animal or beast of the forest gave them unlikely respect. Those who reacted with aggression to the new inhabitants of the forest were unable to fight the enemy who attacked from cover and ruthlessly exterminated the resistance, preparing the forest for the construction of temples for their new god.

Humans understood that the first Elfarion has just laid the foundations for something that was a threat to the Human race, so instead of leading an open war, they decided to secretly wait for the moment when they would be able to annihilate the traitors. Gnomes have gained a new ally who, as some claim, was given the nickname “Noble” too hastily. The elven race under the command of successive Elfarions has repeatedly proved that it deserves to be called so, but there were events that clouded Wood Elves’ reputation.

Elves were very effective in expanding their kingdom in the Autumne Forest, and so came the day when it became clear that they had to populate new areas. The Supreme Council of elven families didn’t always share Elfarion’s visions, then the split was inevitable. Many thought that to be able to face enemies, they have to build strongholds similar to human or orcish ones, and not hide in the thickets of the forest.

Elfarion knew that such a split could end bloody, so he peacefully led some of the Elves to new areas. Thanks to their knowledge and, as some say, the ability to learn about the future, Elfarion chose for the separated secret region north-east of Autumne, full of hills and rocky peaks. It was perfect for creating the buildings that they dreamed of, rich in bright stone and a unique type of wood. At the great council that took place in the new lands, Elfarion said that those who left Autumne are no longer Wood Elves. He referred to them as Elves of the High Houses, whose future will prove again and again that their name will stay with them whether they want it or not. He bowed with his retainers to the councilmen, who were pensive over his words, and set out on his way back to Autumne.

The new land was full of strange animals, but among them, the most distinguished were those similar to horses, whose heads were adorned with horns shimmering with golden colour. Mysterious creatures have in time become inseparable comrades of Elves and their most faithful steeds, whose courage and self-control make them excellent destriers. Elves gave them the name Vallads, and their new land, to respect these mystical creatures, Valladolia, the land of “Steeds with elven hearts”.

With the settlement of new territories, a border began to define, which distinguished Elves from Autumne from those living in Valladolia. As the council decided, the newly inhabited land became known as Valladorum, was to be ruled the emperor who was to live in a large palace with marvellous shapes and decorations. The palace, though beautiful, couldn’t match the subtlety and charm of the forest fortresses of Autumne. Not everyone supported ambitious visions of nobles, whose vision of a new state was associated with an increase in the number of troops, as well as expeditions and conquests of new areas.

These were the times when emperor Aurelis was to rule the Elves of Valladolia, and did so for many years with good results, developing the empire into a strong and stable state. His son Comodaes, however, became a real curse of the High Elf race, leading to the Great War, the aim of which was to take the secret Artifact from the Orcs, which, as the old prophecy said, would contribute to the Elves’ fall. In the atmosphere of emerging conspiracies and incitement to war, many families blinded by the vision of the apocalypse in hands of the Greenskins, or intimidated by the supporters of Comodaes, supported the expedition to the west. The purpose of the war was also to rid the Orcs once and for all, Orcs, who more and more often visited the Ancient Lands and threatened the Elf trade routes.

During this period, the race of Humans was weaker and directed by the fearful King Gaciss, so it couldn’t help stopping the Valladorum legions from bloodshed. In secret, during private meetings, Humans offered something to Orcs that could help Greenskins not only to face the enemy but also to destroy the elven race. It was the revenge of Humans for being once betrayed by the Elves who supported Gnomes in wars. By that time, the Orc shamans had been using Magic improperly, but at the moment when they had knowledge of the Domains of Magic, the war broke out for good…

The bloody war lasted for years, and the corpses of the fallen were so dense that no one cared to burn or bury them. As time was passing, strange diseases began to affect both the fighters and the outside of the city and villages. The troops of both armies, in the vapour of the stench of decay, fought like in a mad trance, and in time both sides lost their faith in the further meaning of the war. At that time in Valladorum a lot changed, and the council decided that the tragic death of Comodaes is a sign that conducting a bloody war makes no sense. Worse, as a result of the wars, the Elves lost the favour of Gnomes, the Orcs not only possessed the Domain of Magic, but also mastered them perfectly, and the empire plunged into internal disputes. Beautiful buildings, which, like nowhere in the world, combined might and elegance, were unfinished or ruined, because all energy was spent on waging war. The cities that had once been teeming with life were now only full of old people and children, for even young elven women fought in the infantry units of Gladis and the light cavalry of Lihballi.

The end of the war was inevitable. High Elves have never undertaken such complex warfare, and although they are waging countless wars, they are no longer on such a scale. These tragic times ended in a split that will forever remind Elves of the Artefact, who, according to legend, has destroyed Valladolia. Perhaps the elven Illuminants misinterpreted the prophecies because the Artifact, who supposedly lost them, was never in the Greenskins’ hands, but in the hands of their betrayed brothers, who, as rumors say, found him in the sands of Sarhea.

Today, in Valladorum, majestic buildings are climbing up again, gigantic arenas from the distant lands of warriors wanting to gain fame, and merchants from around the world are pouring gold in cities full of various treats and the most beautiful women. High Elves and their empire are flourishing, but in the elven hearts, there is still an overwhelming desire to possess a power that will allow them to dominate. Nobody knows if, in the near future, their swords won’t be bloodstained again…