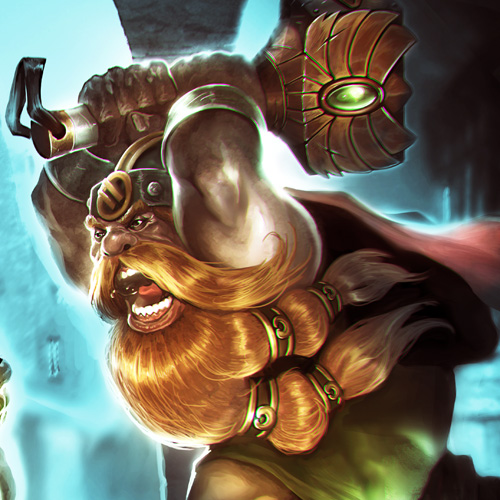 Many centuries have passed since the Dwarves race came from far northern lands. They lived there divided into tribes, which shared their struggle with an unfavorable climate, full of snow and icy winds. Clad in fur, with primitive weapons in their hands, they travelled by sleighs through the Winter Lands, built snowy villages and in time, thanks to their persistence and reaching the mystical mountains later called Fenri, they built their first city there – Dunh. The tribes made a pact there, under which none of them could be compliant with the other, all had to be equal and have one lord. There were many disputes about who would become the king, but the upcoming hard times were to give the final judgement.

Days were getting colder, and winds were so strong that the journey from village to village was certain death. In Dunh, a council was gathering which was to decide on a trip to the south in search of areas with more wildlife and less wind or snow. However, nobody knew that the youngest tribe of Thargs who was often ridiculed and overlooked in councils had already set forth to find these lands. Taunting from the other tribes was harder to bear than the most severe frosts. The quarrels and polemics of the council were so long-lasting that two of the five tribes never received news about the end of deliberations and the planned great migration to the south. Their villages got buried for centuries under a thick layer of snow and ice. Two tribes, Grimms and Eogors, which have survived set off south, but the frosts were so strong that no one believed they would ever reach their destination. Every day the god of frosts Arh took many Dwarves to his land. Whole families, animals, and property were lost in the white abyss…

When everyone lost their hope, something appeared on the horizon – a rider on a large, hairy animal with gigantic fangs. Around him, on a sleigh, creatures clad in furs were singing dwarven songs of comfort. The exhausted Grimms and Eogors couldn’t be more happy and surprised when they saw the young leader of Thargs who held the banner with the emblem of all five tribes.

Everyone understood that the god of frosts had chosen the king for them. From the day of this meeting, three remaining tribes were building cities in the south together, developed their culture, and led a fairly quiet life. All this lasted until the day of the great split, as the Grimms would always be eager for power and bloodshed, and thus they could no longer tolerate the Thargs’ mastery.

The war between tribes was inevitable. However, both sides of the conflict didn’t forget about the old prophecy, which said that when one of the tribes would fight the other, the Dwarves’ race will be deadly cursed. No one began the war openly, but it was already in hearts and minds. But then something happened that even the oldest sages couldn’t have foreseen. The corsairs returned from a long journey with a message that would change the fate of three tribes forever. The goods they brought with them proved that they discovered new rich lands. Much warmer and with more fertile grounds full of beautiful majestic mountains similar to those in which they built their first city of Dunh. As the elders used to say, the destiny of dwarves is a trip to the mountains of Mind and Stadt which were a frequent topic of their songs and ballads whereas the legend says – they will find what their gods were leading them to. Then, their hearts flared up with a desire to travel, and the dispute went away into oblivion for some time.

Again, the Thargs were the first to set out on a dangerous journey towards their land which they would recognise due to the magnificent peaks of the mountains. Courage and stubbornness led them to the destination, but the history of tribes that were just preparing for the trip was yet to be marked with blood.

Northern Dwarves made the eldest Eogors their subjects which they forced by power and dark spells. The executioners were called “The Cursed”, and the bloodshed left its mark forever. Tharg and Grimm tribes became the biggest enemies whose fates and axes were to cross over and over again…

Dwarves from this tribe were the first to arrive after their great expedition to the desired mountains and lands. According to the legend, the first mountain they saw was called Mind, and their new lands – Thargomind. For many years, they were building their biggest fortresses Agrak and Turuk, and the rock city that was to become their temple – Midas Mind.

They live in the colonies and villages surrounding larger cities. This hardy and honourable tribe of great warriors is constantly making sure that its lands are safe and well fortified, as raids of the plunderers are becoming more and more frequent. Not only martial arts and construction but also other areas slowly became the domain of Thargs. In many cities, they have merchant guilds, and the inns they run are famous for the best drinks and solid, ornate chairs.

Elves and Dwarves tend to fall into conflicts and controversies which sometimes result in wars, but they also have many history cards in which both races have shown themselves to be brothers and sisters. Dwarves have always supported the Halflings race, like the Elves, although minor conflicts were sometimes happening.

Thargomind Dwarves continue to believe in Gunnar, god of frost, whom they call Arh, giving him honour on winter nights. According to their beliefs, Arh has two sons – Erik and Asmund, gods of the forest and mountains which Dwarves began to worship when they reached Thargomind. Their mother, the goddess Launa, returns in spring and symbolises a constantly reviving life, announcing the arrival of better days for the people who have travelled a long journey from the distant lands of the north.

They call themselves Red-bearded because of the thick, flaming beards and hair like their great-grandfathers. Their story is full of rebellions and disputes where the most important goal was to take over the tribes of Eogors and Raghorns, whom they considered to be weak and cowardly. They never agreed with other tribes, which is why their story is different from what you can hear from other Dwarves.

Centuries ago, they tried to convince other families that the Winter Lands is not a good place for Dwarves. They claimed that only a journey to the south would save the cold, and conquer other races that should serve the Dwarves. Through scheming and intimidation, they sought to weaken the remaining families, eventually becoming the only one able to rule and lead to the land of destiny. Grimms believed that the youngest family wasn’t the fifth rightful tribe, but a rotten apple that should be attached to the northernmost line of the Sunh tribe. They had a clear plan in that, because they assumed that the winter would finish the Sunhs, and if the Thargs were with them, the Red-bearded would get rid of the two most warlike tribes at once.

Nobody, however, knows that it is the Grimms’ fault that the two dwarven clans – Raghorns and Sunhs rested under a thick layer of snow in their ice grave. Although the Red-bearded didn’t get rid of the youngest tribe, they were pleased to eliminate the belligerent inhabitants of the farthest north and continued to act according to their dark plan. The Raghorns were not the target of their destruction, but, as they preach, they died because of their sluggishness and lack of submission to the Grimms.

The red-bearded Grimms and submissive Eogors set off to the south, in search of more favourable areas for living. The youngest hated tribe of Thargs had already gone there, protecting itself from a certain annihilation. In time, those who were the perpetrators happened to be victims themselves because the harsh winter and lack of supplies meant that the journey could end in death. Most of the Dwarves were at the last gasp, but then they saw a godsend – Thargs. The innate animosity to the youngest tribe is so strong that the Red-bearded are still trying to forget that they owe their lives to Thargs. They saved the bare Dwarves and brought them to their newly built villages. Already then, the Grimm elders made the decision that they would once destroy the Thargs to erase this shame from their own history.

For years, the three remaining tribes of the Dwarves lived together, but with each passing day, the Red-bearded were preparing for a great war. However, the submissive Eogor tribe also grew stronger, and the defeat of two tribes at the same time was too much for the Grimm forces… These were the times when the Red-bearded were already worshipping their new god, Grom, who they believe has helped them get closer to domination over other tribes. The corsairs returned from a long journey with news about the discovery of new lands. The youngest kin saw the possibility of fulfilling the prophecy about finding the desired land and mountains.

Disputes that could have led to a war at that time were silenced. The Thargs and the Eogors thought that ultimately it was a prophecy about a bloodshed, as a result of which the extermination of the Dwarven race was to end, preventing Grimms from initiating a war. However, the devious Red-bearded knew that as soon as the Thargs went to the unknown land, they have their own plan to realise. Humbly, with a mocking smile, they watched as the Thargs’ ships sailed out. On the next day, they took over and completely dominated the Eogors. The tribe of Eogors didn’t die, but the life it leads is tragic. Not only have they become slaves to the Red-bearded, but also the purpose of their bloody practices, experiments with dark magic and mixtures that distort the soul and body.

As the legends say, the curse would reach those who shed blood, but the Red-bearded already sold their souls to Evil, and the old beliefs or deities didn’t matter to them. They knew that the new land could be a perfect place for them to build cities and develop their cruel race. A dozen years after the bloody takeover, they set off to find their mountains and lands which they desired rather to plunder than to worship. The sea currents carried them to the mysterious areas full of huge trees to build their terrifying boats, and wild beasts which, apart from meat and fur, were also supposed to be perfect companions of their plundering expeditions. They called this place Grimmstadt and the highest peak Gromhorr after the name of their beloved god.

All cities and Grimms’ settlements are fortresses in which they develop their war culture and knowledge. They arrange bloody battles and constantly prepare for invasions, thanks to which they are trained in war crafts like no other. To be able to compete with each other, they divided themselves into clans, which also allowed them to protect themselves better against attacks. Women and children decorate their helmets and shields of warriors with intricate signs and ornaments that, in the distant world, arouse admiration and fear, both on the battlefields and marketplaces. The Grimms don’t wear heavy armour, but only the necessary equipment and weapon which, in contrast with their light skin, red hair and beards, arouse respect even in the greatest warriors.

Those who have encountered this race know that the Northern Dwarves are not only deadly threatening but also cunning. When they are spotted in longboats called Drakkars coming ashore, their horned helmets, great axes, and round shields are harbingers of death and destruction…