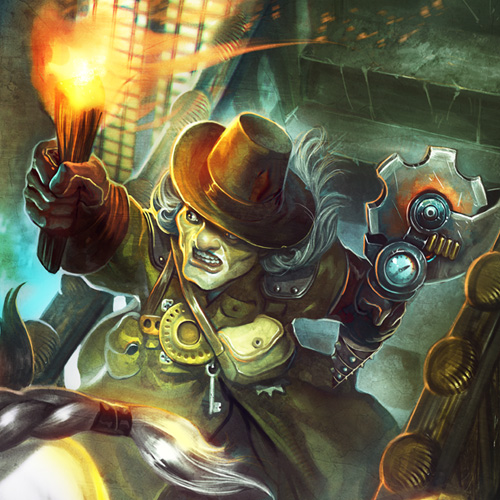 Inhabitants of cities and villages are rarely aware that there are many huge underground corridors under their sunny and green lands which illuminate the grace of the Blaze Crystals. In their light, you can see low stooped, dwarfed figures, constantly travelling between gigantic underground cities and settlements which are the home of one of the oldest races – Gnomes. In the corridors, you can hear the clatter of their bizarre machines which continuously drill new tunnels and routes leading to new mines and places as mysterious as themselves.

Formerly, the Gnomes race didn’t have such advanced technique and magic, which resulted in many feuds between them and Humans from cities, whose houses were shaken by underground explosions. It happened that entire villages disappeared in the depths of the earth, because underground constructions which were far from perfect didn’t withstand their weight and collapsed, burying underground chambers and corridors. Today, the underground routes are so huge that many above-ground cities would envy Gnomes the freedom with which they can move. Adornment on the walls and the subtle motives of plants whose roots help in maintaining the weight do not give way to many fancy ornaments from the human cities. For a long time, underground structures have not been damaged thanks to supporting special shapes, magic spells, and plants called Akacires, whose roots are as strong as steel.

The underground world is always vibrant with life, but Gnomes have hamlets on the surface in which they prosecute experiments with light, new devices, and Gnomechanics. It happens that they set out on expeditions in search of artefacts or new magical spells to constantly expand their guilds and schools of magic.

Gnomes are a long-lived race, they can live 300 years without any problems and still enjoy good health. Their characteristic feature is that when they reach the age of about 30 they already have wrinkles, which is why even the young Gnome looks old, arousing respect. Their age is almost always invisible to other races because when you see an oldie running with all the equipment and a large book, it can be a student hurrying for his classes, not an old lecturer of magic.

Gnomes are joyful and talkative by nature. They have a positive aura around them, and when they discuss spells or Gnomechanics, there is no such power to outtalk them or change the subject. They dress extremely colourfully and like to carry a lot of different equipment with them without paying attention to whether they need it. It all gives them an outstandingly gaudy look, but they always emphasise that if a thing can be useful in 20 years, it is worth having today.

Every Gnome likes to tinker and construct new mechanisms, and everyone is an inventor to some extent whose work is often recognised by other races. Regardless of whether it is a weapon or household equipment, they will always change something in it, adding improvements thanks to which an ordinary fork may also become a knife, flyswatter, trigger, crossbow, key, or an extremely effective weapon with perfect balance. There aren’t two identical crossbows, clocks, or anything else in the world of Gnomes. They insist that nothing gets broken, it just changes the purpose, and their owner – if not a Gnome – often cannot adapt to changing conditions. As Gnomes claim, nothing should be thrown away, only “corrected and repaired”, and thus we will discover how interesting and full of technical surprises the world around us is. This interesting philosophy causes that these small guys are often perceived as “hamsters”, hiding piles of junk in their homes in which they themselves feel perfect, spending hours on their picking and looking for new uses.

Their next passion is reading books from various fields, from breeding grasshoppers to the secrets of excretory diseases of Trolls. There are no Gnomes that don’t have a small home library, therefore it is common to see them at meetings, on which they read books together, drinking a nettle brew. The debate that follows can last for hours and the nettle brew is replaced by a spiffing barley beer and sausages in baked plum sauce.

Gnomes are protected by their regular army which, although it may not look very young, is well-trained and equipped for various tasks from sudden sieges to fighting in the swamps. The natural shape of the underground world favours the Gnomes in defence of their cities, and if there are serious problems, they display their gigantic Mechanical Golems, whose task, besides drilling tunnels, treating underground air, and completing many bizarre quests, is also fighting in the battles. If all gnome mages use their spells with which no one could compete, underground corridors tremble with explosions and shouts of enemies’ pain.

The most unusual and protected place in the world of Gnomes is their capital, Gnometrion. It was built on the bottom of a gigantic lake which, through the crystal bottom, lets the sunshine directly to the tops of buildings and towers full of cables, shiny pipes, and large boilers, from which the clouds of multicoloured smoke are flying out. Huge clocks measure time, pressure, magic intensity, and many other parameters thanks to which the capital of Gnomes has unlimited energy resources. On great bridges the Mechascribes are bustling with the books, constantly recording something, the great Masters of Knowledge gives teachings on the school terraces, where Magic and Gnomechanics are equal fields, and in the lowest and well-guarded chambers the female Gnomes bring up gnome children. Among the noise of pistons, the hiss of pressure stabilisers, the ticking of many clocks, and other mechanisms, you can hear the cheerful song of miners who improve the structure of the giant building and its supports for days.

Gnometrion is the largest gnomish city, but there are many others, such as Smaar or Tykatrion which are endlessly expanding and improving. Gnomes’ ground factories supply some of the boldest cities of the humans with their unusual energy, but due to its unpredictability on the surface and the tendency to incinerate those who are inattentive and curious, it doesn’t gain general appreciation among other cities.

Gnomes are perceived by others as nice and friendly weirdos, whose world revolves around spells and mechanical constructions. It seems that their functioning is sometimes too complicated for the minds of mundane creatures. They generally don’t have many enemies. However, since Hobgoblins and beasts from the underworld haunt their tunnels, Gnomes roam these tunnels much more carefully and patrol their underground routes more often than before…

The Wolf Brothers are coming!