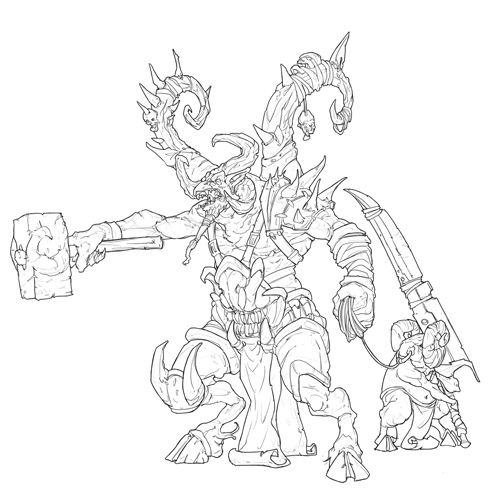 In the distant times, when the Human race openly opposed the rulers of Sheol-morg, they decided to recruit the most terrible beasts into their armies, so that they could finally defeat the tribes of the Ancient Lands. The dark apostles have been sent to various directions in the world to seek out the most terrifying races and recruit them to serve the foul land of Sheol-morg. The apostles returned with various beasts, and many of them terrified even the Black Knights, for it was unusual to see maddened trolls from the Alorn Mountains or minotaurs from the Wild Lands.

The apostle called Tenebrian returned with a race that did not make such a great impression as the great beasts, but his expedition, as it soon turned out, was to significantly influence the development of the Sheol-morg empire. The creatures he brought back, despite being large, did not appear wicked or warlike, which initially infuriated the great Emperor Adrag, and his dark minions were eager to punish Tenebrian. His head was close to decorating the emperor’s dining table, but it was the day when the emperor’s five-year-old son strangled the first slave with his own hands and the ruler wanted to celebrate the day. He showed mercy to Tenebrian and spared his life, but he and his race would now live in the dark dungeons and mines of Sheol-morg.

Their task was to look after the slaves and administer punishments, but in the dark, underground rooms, Tenebrian began to practice dark and bloody experiments with the bodies and souls of their charges. He suspected that the race he had found in the northern territories of the great Agalloch Forest would be perfectly suited to inhuman experiments. The result, however, exceeded his expectations. Slowly, in great caverns, he performed terrible rituals and manipulations, transforming them not only into even stronger creatures, but also into much more cruel and cunning ones. Some, extremely cruel, he transformed into monstrous beasts, which in huge halls full of pentagrams, dark signs and filthy candles, were subjected to the most terrible rituals of tearing out souls and replacing them with demonic entities.

When, after many years of zealous service, Tenebrian demanded a meeting with the emperor, everyone knew that such audacity would tear the skull off his neck this time. Many of the remaining apostles diligently trained their beasts and the races they became masters of. Ardaal had power over the greatest creatures, such as trolls and maggots, which he blessed with rot and disease, his dwarf brother Sirdi endlessly pained his hounds, which became the steeds of all mutants and dwarfs. Old Lissin has sway over demons that take over bodies and tear them apart. The other apostles remained faithful to the ancient arts of necromancy and black magic, and each sought to gain an advantage over the others in order to gain in the eyes of the great emperor.

What Tenebrian showed to an audience terrified everyone, for the hideous menagerie not only seemed to possess great strength and exuded cruelty, but the old, underappreciated race had now acquired the cunning and brutality that other apostles could only dream of. As the great procession of Fauns followed Tenebrian, there were shamans, commanders, herdsmen, monstrous fauns, and a well-disciplined, bloodthirsty army among them.

None of the apostles could boast of such well-organised subjects who were not like mad beasts or strange creatures, but were something that could wage war in the name of the empire. The great emperor himself, when he saw the army of Tenebrian emerging from the depths of the great mines and dungeons, could not help but be amazed. But he knew that with such strength Tenebrian could claim the throne, and it would not be easy to face him, even with all dark powers that were in his possession.

As Tenebrian approached the throne, he shot the emperor a cheeky look and made a gesture that chilled everyone’s blood. The crowd saw the great army take up arms, and a grim cry hail from the Fauns’ throats, “Adrag! Adrag! Adrag!”. By this act, Tenebrian gained much more than he could have ever dreamed of, for he and his army gained not only respect in Sheol-morg, but also great influence.

At Tenebrian’s disposal are the cunning Faun warlocks who, as others say, are his eyes and ears in a cruel empire, therefore, despite many attempts to assassinate Tenebrian, he is still the emperor’s right hand. Although his body is many centuries old, thanks to his dedication to the dark forces and the power of magic, he becomes an increasingly powerful apostle with each decade.

And the Darkness enveloped their souls…

The Fauns race has become known as a cruel army that has proven its effectiveness and loyalty more than once. Dark rituals completely wrenched out any good qualities, replacing them with the most depraved desires that could be fulfilled in the Sheol-morg empire. Faun priests can indulge in constant experiments on slaves, herdsmen, otherwise known as beast keepers, are fans of torture and can do so in their underground chambers without inhibitions, and Faun warriors for days and at night they can fight by shedding blood, because only this gives them relief in the great suffering that plagues their souls.

Over the years, this race has become known as the Dark Fauns, as they no longer resemble what they used to be. Their eyes breathe a hate that nothing can match, which is why in many lands simply saying their names is frightening. Sometimes they set out with Sheol-morg on secret missions, looking for old portals or magical artifacts in different parts of the world, but they always choose depraved and bloodthirsty beings who, unknowingly, become their puppets. Often, they also use Goblins, Orcs and Darklings to avoid exposing themselves while wandering around the cities.

When their helpers fail, the Dark Faun may come out of hiding to defeat the enemy with his enormous strength or knowledge of witchcraft, but he will do so as a last resort, because in many parts of the world they are a very hated race.