This huge forest full of intricate paths, huge gorges, and monumental trees may slightly resemble the Autumne Forest in which the Wood Elves live, but Autumne is said to be very dark in places. Not many will say so about the Agalloch Forest because the term that suits more is “mystical”.

This forest is not so dense, and the trees seem shapely and less sinister. Although it is located in the territory of Argatoria, there are much less terrible beasts and creatures here. They were all caught in the past by Beast Hunters of Sheol-morg to become part of the cruel Emperor’s great menagerie.

The forest is not free of giant creatures, strange monstrous larvae, or elementals. It has many glades and hidden places, radiating magical powers that manifest themselves in a variety of ways. You can find here magical springs, old caves with strange engravings emanating splendor and trees whose leaves have stopped in autumn colors and have lasted for hundreds of years. Among all these places, you can also see fragments of small buildings, some of which are infamous portals, which can use secret incantations to activate ancient mechanisms.

Somewhere between all these mysterious places is a small inconspicuous gate that seems abandoned as if it used to lead to some special place. And so it is, but to enter that place, we must have a unique key. There are many stories about how it looks, some even try to convince the naive that they can buy it for the right amount, yet the only ones who cross the gate are Dyniaqs and those who were invited by the Eternal King.

However, the Dyniaqs are not the only race inhabiting this forest. There are also Fauns living here, even though a significant part of their population was enlisted for centuries for slave service in Sheol-morg, and the rest is a shadow of its former strength. You can find here Wild Goblins, Voraks, who venture in search of trophies, Wild Elves, and gloomy Zvantals. There are also many adventurers who are looking for rare plants, and mages, beast hunters, or dreamers who are looking for portals, hoping to find some great treasures.

Fauna and flora that occur in the Agalloch Forest are much more diverse than in other forests, they also give the impression of less aggressive, however, the influence of many magical places deforms them many times, often enough that it is difficult to determine what is a mutation and what is not. Many of the local specimens also go to the tables of the noble from around the world as an unusual dish or to diversify their chambers and even costumes. 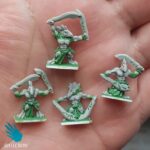 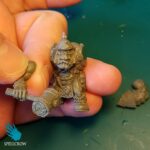