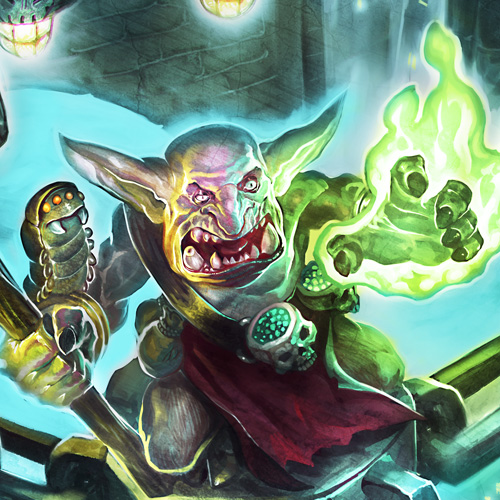 Born of darkness, hatred, and unsuccessful warlocks’ spells, they took on a foul look, as befits the most zealous servants of darkness. Initially treated as the creatures similar to the Spawns of Magic, they were considered harmless, and therefore their rotten souls could mature in the shadow of ignorance and insults. They were rare, so nobody suspected that creatures hiding in caverns and burrows deeper than the Gnomes’ cities and underground routes, in time will become a race that the more wise mages call the Apostles of Gehenna.

In scanty, snagged garments, dirty and smelly, they come out of the cave to follow their creators’ plan and prepare everything for their arrival. At first, nobody believed in their calling, and to this day, many consider them to be mere robbers and bandits wandering around cemeteries, old battlefields, and destroyed fortresses. Slowly though eagerly, the Hobgoblins with their mad anointing celebrate their rituals which, though still primitive, with each blow of their black hearts give them strength, and bring them closer to the deeds they were destined for.

Looking at their skin covered with dirt, ripening abscesses, and strange furry growths, where thousands of cracks and scars are enwinding, you can only feel aversion to this race, but someone who had the honour of consuming hobgoblin potions will notice much more… Every day, their bodies gain new scars and growths, just as every day their underground kingdom gains new corridors, tunnels, and dark temples that disgorge new scary creatures.

The dirt that hides their bodies hide their burrows among castles and cities as well. There, unconscious inhabitants – or, to be precise, their bodies – attract Hobgoblins like a magnet. In large cauldrons, using corpses of their victims, they brew potions, whose effects cannot be guessed by even the most intelligent of mages and scholars. Formerly ignored, today, they arouse fear and terror, but as the young generations of the Hobgoblins sing, it’s nothing compared to how they will play with the bodies of victims when they grow up. And how big will be the anxiety when the Dark Mother of Birth and the Father, whose name they don’t even pronounce themselves, will come.

The first blessing they received was the ability to build the Artefact Dark Lanterns in the great forges, thanks to which, as they say, they would light their way to the Mother arriving with the second Artefact. With it, they will be able to take possession of the beasts from the darkest depths of the earth, as dark as their souls. According to the legends, the third Artefact is the Big Hammer which can destroy on a scale that none of the races has ever met. At this time, Hobgoblins, according to the words of the prophets, will be the strongest race, and others will become its servants. Furthermore, if they prove worthy, they will be granted the honour of living in their underground, abandoned dens…

These legends evoke wry smiles on many faces, but they disappear as soon as in the darkness of the night, among the tombstones and temples, they see the dark glow of the Artefact Lanterns and their owners who steal corpses to their rituals and practices with great devotion. Many cities and villages guard their cemeteries, but even the city guards are afraid of bizarre grotesque corpse-hunters, whose appearance, the closer to the night, the more frightened soul is. There are also those who, for money or out of duty, hunt Hobgoblins to prevent them from their dark plan.

No one knows, however, what measure the time of Hobgoblins is, and no one knows how much time is left for the arrival of the Dark Mother of Birth, but looking at the strangely smiling filthy faces, it may be very little…