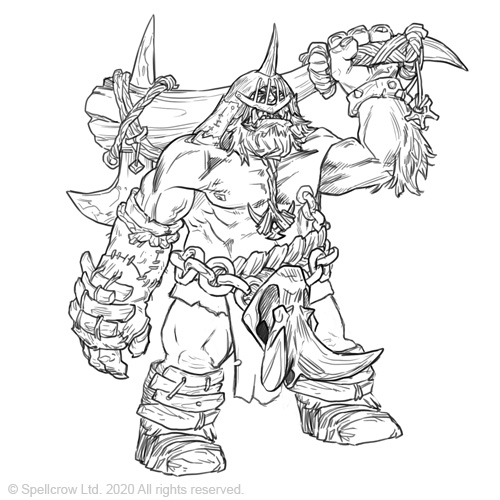 The Half-giants are not a common race, but there are regions, such as Boria and Efrough, where they are abundant and an integral part of the local community. They can also be found in regions where fighting takes place and where their stature and strength are an asset. However, they do not belong to the cunning races and avoid gangs of rogues or bandits, joining rather bounty hunters, witch hunters or wandering monks and priests. They are endowed with extraordinary strength and perseverance, and thanks to their powerful physique, they evoke fear which in itself is already beneficial for their companions.

Half-giants have a fairly cheerful disposition and can mock and joke in combat, because they do not take even the greatest threat seriously. They joke that even death can be broken, you just need to know how. Due to their dimensions, they can drink countless drinks, eat as much as three voracious people, and they will not despise any woman in their playfulness and courtship. Rumour has it that this is why it is a race whose individuals can be very different from each other, since the mother of one could be a playful Halfling priestess, and of another – an Orcish matron. Regardless of what the Half-giant’s mother looked like, his father’s blood causes him to have most of the attributes and power after him, but minor traits like skin tone, the shape of the ears or the protruding fangs may be of the mother. It also happens that he may have maternal character traits, but deep down he remains a descendant of his ancestors who came to the Ancient Earth many centuries ago.

Where exactly this race came from is difficult to say, but many return to the land that is also a home of the great dragons and beasts – Sardraq. This place is called their present home, and they mention that they arrived there to mount great creatures to whom other races bow down.

They are used to wandering and maybe it is for these reasons that they did not build great fortresses and castles on their territory. There are, however, many temples, chapels, and strange squares in the Sardraq area near the Blazing Sword Pass, but none were built by the Half-giants. The great massive shapes of the buildings, full of great chambers with long narrow windows, are found only here, and the mighty towers and statues of mythical creatures arouse fear. Many of the sculptures are creatures that could only have been born by an inhuman imagination, as their silhouettes do not have much in common with humanoid ones. Whether these are races from the deep or from distant stars, it cannot be confirmed, but everyone who has seen them tries to forget about them.

The entire area of Sardraq is considered to be the legacy of an ancient race that some scribes say would have lived there long before the gods came. There are many theories as to who they built these great buildings for, but there are some who say they are temples of the true gods, called the Old Gods. If their names are written there, it is in a very ancient language that no one today can read or confirm whether they are actually dedicated to Spelrok, Mamroth or Sheptuh.

The Half-giants have never looked after these structures, and seem to be uninterested in their fate, claiming that the temples are not for the gods, but for their followers, and they are not yet born. These enigmatic claims disturb many magicians, soothsayers and priests who perceive some mysterious events, but cannot read them and interpret them properly. They wander with their porters between buildings, looking for evidence of their theories and fears. Many of them come back with nothing, other fear turns into madmen, but there are also those who die without a trace.

Half-giants are believed to be the guardians of temples who were supposed to protect the gates of holy places. Unfortunately, it is unknown from whom and why. The fact is that they are built for defensive combat, and many buildings in eastern Sardraq seem adapted to their size. Also, their lifestyle in which they do not need much sleep, and they can survive without food much longer than humans, means that many months of sieges will not be a great challenge for them. The Half-giants, however, give the impression that the time of their service as guardians has not yet come, and many of them are rather travellers today. The race which is said to have looked after the temples for centuries, but have been relieved of this obligation, is even more mysterious and can only be found in the distant lands north of Azuria.

The guardian monks were supposed to serve the Half-giants, but were relieved of this oath until the elect Atarakhan knocks on the gates of their monastery. The monks of the Tao-fu monastery, called Ratmen by many, do not confirm these words, continuing in their meditation and cultivating ancient martial arts and traditions. The wanderings of the Half-giants may have various reasons, but one thesis is that they are the ones who are to find the coming followers and give them protection without arousing any suspicion.

During their travels, the Half-giants learn many professions and gain various talents thanks to which they can become not only great warriors, but also scribes, astronomers, merchants, or whatever they choose. Their optimistic disposition allows them to ignore many problems and barriers that would discourage many people from learning a profession, and therefore they have very different professions and abilities. Such a great brawn allows them to wield very massive weapons, the blows of which can split the opponent in half, along with his armour. The set of these features makes them perfect warriors who, in changing conditions, can always surprise with their abilities, and in the moments of the greatest terror, even with the Black Knight as their opponent, they will joke and mock his horned helmet or small axe.

Their mocking and playful exterior, however, hides one more character feature that casts a shadow on their kindness. Some say they witnessed the Half-giant’s eyes gazing into infinity, being completely devoid of positive features and showing something disturbing about them. The playfulness was gone and it was replaced by the nature of the beast, whose fury wanted to come out like a trapped animal. Many argue that the Half-giants, through their superficiality, try to tame something dark in their hearts, and so far they have succeeded. The more insightful believe that the Half-giants leave their comrades for their own good, because they are aware that only in solitude they can overcome the darkness within them.

Many Half-giants travel the world without revealing their true name, but still stories of their heroes’ deeds can be heard in inns and tabernacles around the world. The legend of Turgor One-Eye is one of the favourite songs often heard in Istania.

In its words, Turgor came on the ship to the shores of Istania and immediately caught the attention of several depraved high stewards who decided to use him for their dark rites dedicated to Seth. Turgor broke the necks of the four thugs who were about to lead him into the trap, and then himself deliberately jumped into the large pit to see what was planned for him next. When a few other thugs came for the sacrifice, they put Turgor on the cart with great difficulty, and he, fully aware and with typical amusement, allowed himself to be taken to the house of one of the stewards. It was, in fact, a temple in which the stewards were getting ready for ritual murder, but while they were alone in the great sanctuary, a loud laugh escaped Turgor’s throat. The dazed cultists were so shocked that they only regained their ability to act when one of them froze after the Half-giant stuck a large black candle into his skull. The skulls of the next two merged into a single mass, and the fourth chose to jump through the window.

As Turgor cleaned his robes, he saw a shaggy creature in the corner of the room, staring with hatred at the Half-giant. It was a bloody familiar that was supposed to drink blessed blood and give its power to Seth, but now his role was no longer relevant. Turgor had a different plan, and with his usual smile, he chose the largest robe that hung in the room. Many say that for the next few years, he travelled around Istania with a bloody familiar and shed blood of all the followers of filthy gods. He did it, as he said with a mockery in his voice, only for his god – Seth.

There are many similar stories, and the actions of the Half-giants are so unpredictable and fun at the same time that this race has become not only the source of songs, but also many theatres and street artists describe their achievements.