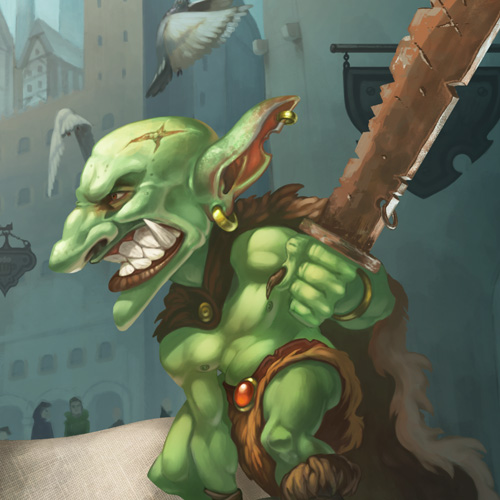 Goblins are a race famous for its cunning, which often allowed to survive difficult times and defeat enemies. Their first allies were the Orcs, who are considered to be their older cousins, but looking at the appearance and the different characters of both races, kinship is far away. Since the dawn of time, when the packs of primitive, small warriors from various goblin tribes fought among themselves, the aggressive character and fierce nature of these creatures were evident. Goblins usually attack without hesitation, and they rather think about their actions after the fact. Unpredictable leaders such as Uta-Fati or Boto The Cunning are still heroes of goblin songs and yelps, even though their deeds were more crazy than heroic.

Goblins can fight their village battles with incredible ferocity. Day and night, they kidnap each other’s most beautiful women and totems in the form of skulls of old lords, which are a reason for their pride. If the clan catches the totem with a skull of the enemy leader, it becomes the pride of the shaman’s privy and his small, grumpy striplings. Insults and skirmishes have no end in Goblin villages, but there was a moment in their history when they acted so sensibly that to this day in the stories of shamans this period is called “Reasonable”. Nobody remembers the time when the legendary Bati-Fumpi was born, but he was the one who showed the Goblins a new goal and a new enemy…

Orcs still wonder what kind of perverse demon the young Goblin Lord had taken over to try to enslave them, even though they were a larger and much stronger race. The astonishment of the Orcs at least partly surceased when they saw the face of leading Bati-Fumpi, rushing on his gigantic bat among other flittering brothers.  His face reflected madness and a lack of senses, and perhaps this particular feature impressed so much other monstrous greens who attacked the Orcs with irresistible waves. Orcs couldn’t ignore this attack, for the city of Kargoth, which was supposed to be the dark capital of the orcish race, was not fully fortified and ready to repulse the attack.

Orcs decided to take a step that they normally avoid by choosing more brutal solutions, but in this case, the aggressor’s demands could have been given much more, which is why they refused the first attack and asked for talks. The Goblin Lord, thinking that the enemy had just given up, in his goodness decided to listen to what the losers had to say. Goblin legends say that Bati-Fumpi got there ‘something’ from the Orcs. Something to make him stop fighting further. After a few days of deliberation, the Orcs announced to the invaders that their lord had gone to the land of goblin heroes to rule his subjects from there. To this day, goblin matrons tell their little goblins about something the Orcs have called “Fokup”, and what they gave to Bati-Fumpi to propitiate him. Apparently, the prominent Umbata-Raaa lord looks at his race and directs its fate. He is the Goblin patron of persistence and courage, and he also makes sure that goblins follow his exemplar,  always expecting what is due to them.

Immemorially, there were Goblins who fled from village fights, perpetual planning of invasions and conquests, choosing the lives of mercenaries and travellers. There are even opportunists who go to the Ancient Lands to disgrace themselves with learning and gaining trinkets. Goblin elders are called “Handelo” – the outcasts who abandoned the path of tribal warriors for poor civic pleasures. Today, many Goblins live in different cities and villages, refusing their wild roots, choosing a life full of civic adventures and dangers. Free from village rituals, they devote themselves to professions that provide them not only with fame but also with wealth.