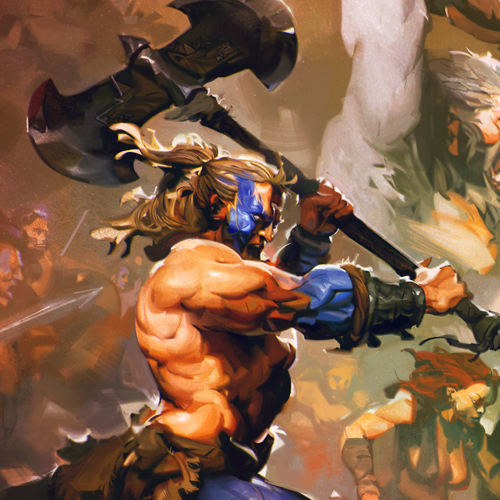 Humans are the oldest race, which, as the legends say, was wandering through the lands with enormous beasts, which they primarily considered their deities. The innate aggression has brought this race to the brink of extinction many times, but the determination helped them survive and build large empires. The most depraved tribes have created a huge empire north-east, which for thousands of years has aroused fear and has been the biggest threat to all other races. Humans have fought many wars with different races, but the most fierce ones they fought between themselves. To this day, in the far east, the Human tribes fight battles, just like their ancestors who were wandering through the vast land called Argatoria. This race can be encountered also in the very far east, in Indaria, but the biggest density of their population and the five mightiest lands they inhabit are on the Ancient Lands.

In the north, the woods full of wild creatures, mysterious glades, and thickets are inhabited by the bearish People of the Woods. Their land is Undorh, and they defend it from the aggressive invaders from the south. They believe in the strength and might of nature, which provides them with everything they need. They despise any gods except for the strong and warlike Grom, and his chosen one, Bianna. They are one of the very few people who don’t fear the Northern Dwarves. Many deem that both races don’t shed each other’s blood due to the belief in Grom, and they even celebrate and trade together.

For the people of Boria, Undorh is a land of savages who should be taught what discipline and true faith are. The areas of Boria are filled with villages and towns, whose wealth is guarded by the great monasteries and commanderies. The discipline and order are omnipresent, but even Boria is turned by the inner darkness. It is said that some of the Orders got out of the way that was delineated to them by the edicts, and they exchanged them for dark rituals, bowing down to very strange gods. Despite certain problems, Boria is the place where, like nowhere else, knighthood and Paladins are the greatest strength.

In the south of Boria, there are two lands, from which it cut off with impassable swamps and walls. First of them is Istania, the land of people with a very cheerful disposition and many dark secrets. Like nowhere else, in this place, the delinquency blossoms, from the small one to such a well organised one that it resembles a guild itself. There is mainly a sea trade in Istania, and many cities are situated near rivers or highroads. The inhabitants of Istania, despite their proclivity to revel and risk, are also known for unusually beautiful ornaments, which can be seen on the buildings, ceramics, as well as weapons. Their finesse gives place only to Elves. In Istania, there are also plenties of seminaries and universities, which educate not only leading scholars but also fencers. Nowhere else in the world, the mastery of arms with a weapon like a rapier is loved as much as here.

Both lands, Boria and Istania, border with a gloomy land called Vartevia. On these areas, the sun rarely shows up, as the sky is constantly covered with clouds, and the fogs lazily trail over the gorges and fields. The people of Vartevia are extremely unsmiling, and their sullen faces and dark eyes arouse fear in many. The gaunt faces don’t surprise anyone here, because a lack of the sun bears in on the harvest. However, it is the most pleasant thing one can say about Vartevia because it hides the homes and lairs of the creatures born of darkness. Here are the castles and mansions of the Vampire families, which came into possession of this land that they viciously administer. For the Humans of Vartevia, the presence of these creatures and their servants, which are ghouls and zombies, is nothing extraordinary. The countless number of burial grounds and graves, which are the relics of the old wars, provide new battalions and loyal servants for the Vampires and necromancers. The people, in large part, got used to this conjuncture, but there are those who openly oppose the bloody reign. They organise in the groups of Hunters who fight the Vampires. They are not alone in this fight, because the areas of Vartevia are inhabited by a long-time enemy of the Vampires – the Werewolves from a region called Valhelia.

The last land, the mighty of which was a reason for the great envy of its neighbours, is Morten. To this day, the most important roads run through this land, and the myriad of cities eclipse other lands with its wealth and majesty. One city, however, towered over all other cities with its wealth, being the great capital of the world, a gigantic metropolis, to which every day thousands of travellers from the far side lands were arriving. Countless riches, nobly born, fabulously wealthy merchants – all this was creating a wondrous majesty of the Umbra Turris city. It was a pride of the oldest race, the statue of their might, which ultimately caused huge wars a few times, and in the heart of the city, the Evil has nestled.

The great Umbra Turris, as well as its land, was a place of many wars and today, its majesty has significantly faded. Back in the day, many nobly born and rich people were arriving in the city, and today it attracts villains, adventurers, and cultists of different gods. The people of Morten, although they try to rebuild the former might of their land, has known too many tragedies, and the gloomy burgstalls and barrows, which remained after the wars, became the habitats of brigands and outcasts of different races. The Humans of the Ancient Lands have always been surrounded by other races, but it is Umbra Turris, where one can meet their representatives from the far side lands. The people of Morten are not as trustful as they were anymore, but they are still the descendants of those who created the might of Morten, and of those who had suffered the heaviest losses in the wars against Sheol-morg.

Although Morten is a land that has been grim and sombre, there are areas, where people still can relish the joys of life and celebrate together. The libraries of the old universities hide notes about the domination of Humans, which they formerly had over other races. Notes about the enslavement of the Elves, about enormous and brutal wars with Gnomes, about the treason, as the result of which the Orcs came into possession of the Domains of Magic, and about many more. They are the proof that the Human race, although it stacks up as the most ordinary race against the others, is the most complicated one, and full of contradictions.