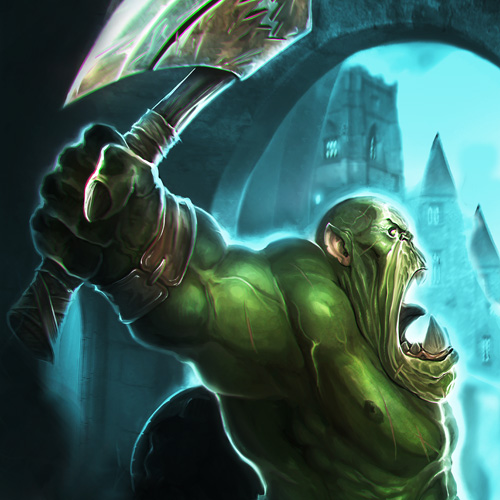 The origins of this race were noted in ancient times when none of the races was considered civilised. Orcs are a strong and aggressive race that began building its empire in the far north of the Ugruk-hor land. Fighting frequent battles with the dwarven tribes, the hordes of their younger cousins – Goblins – and Wild Humans, they were passed for the most terrifying enemy whose strength was unmatched.

Their nomadic lifestyle has made them perfect warriors able to adapt to every climate and every place. The orc songs say that the founder of the capital called Kargoth was Astorh, a wild warrior with supernatural abilities, whose strength was so immense that he tossed corpses of his enemies in every direction, wandering through the battlefields. He also had an extraordinary intellect for an Orc, and thanks to him, Orc tribes chose a sedentary lifestyle. They began to build large, massive fortresses at that time, which they improved to such an extent that today the great Greenskins’ strongholds are one of the most dismal and horrifying buildings that are virtually impossible to conquer. In the darkness of the chambers, filled with sinister symbols and fumes of suffocating olibanums, one can hear the whispers of the shamans, who mention one more name of the great Orc leader.

The dissident known as Sael was so cruel that his evil reputation tops everyone. Due to this, some tribes were considered the demon incarnations, which, riding on the wild beasts of the forest, plundered everything that stood in their way.

As Kargoth grew stronger, Sael’s hordes marked a bloody trail, thrusting westward into the unknown lands far beyond the Wilderness. There, as recorded in the Books of Hate, Sael and his army encountered something that they had never seen before and could not destroy. A primitive race with a dark green-brown colour resembled Sael’s warriors but was much larger than Orcs, and the wildness that smouldered in the eyes of these beings aroused a sense of terror in all.

They were named Nerh, which means “black” in the Orc language. News of their strength and destructive power wandered faster than the green-skinned army, which is why Sael’s warriors were virtually unvanquished with such an ally. Whether Nerh became slaves or comrades of the Orcs, no one knows, but legends say that only half of the orc troops came out of the black areas. Many say they have not perished, but have been devoted to the lord of the Black Orcs as a sign of the eternal alliance.

The warlike temperament of Greenskins causes that brutal battles often occur with anyone who does not accept the demands of the Orc rulers or stand in the way of their destructive army. There was a time when elven families decided to destroy the Orcs’ cities and, if necessary, the race itself because the strength and power of Orcs could threaten the Elves. The great plans of Elves came to grief, and although they stopped the development of brutal civilisation for a time, they paid a high price for it. No army has achieved victory, no one deemed a loser, so only time will show when these two races will again grind in a brutal and cruel fight.

Paradoxically, thanks to this war, called by the Elves the War for the Artifact, Orcs learned the Domains of Magic, which they received from the Humans in support of their difficult times. To this day, Gnomes have a grievance with Humans for the tragedies that have happened because of spells cast by Orc mages whose knowledge of the Domains of Magic was too low. Magic in the hands of Greenskins took on a new face that scared even themselves, but nothing could stop what was coming.

Orcs are constantly fighting against Thargomind Dwarves, but above all, they hate Gnomes, whose ominous underground machines – as one of the few – are able to ruin their heavy fortresses. Today, Orcs are a force that no one can openly oppose – a brutal and determined army, which if provoked, will completely destroy the enemy.

For many, maintaining peaceful relations with Greenskins is something that cannot be underestimated, but Orcs have their own vision of the lands and the world, so neither their enemies nor their allies can sleep peacefully…