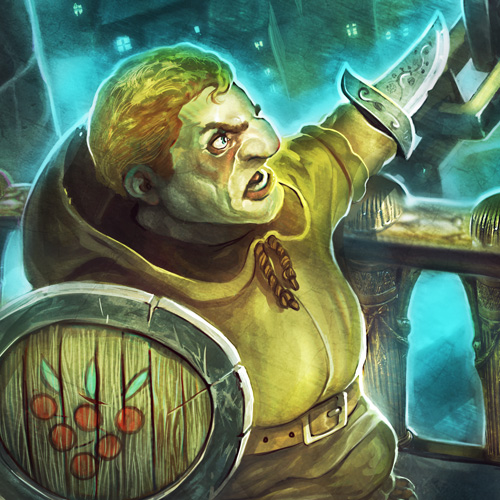 Krótkins are an Elves related race, however, it is much smaller and more cheerful. Colloquially, other races call them Halflings. Their kingdom is known as Bute, a land hidden among the northern parts of Autumne Forest, but very often you can meet them in many cities and villages around the world.

They love to cook, bake cakes, brew beer, and produce the best materials in the world, from which they sew their checkered trousers and beautifully embroidered shirts and cloaks. Rarely will the Dwarves admit, but most of the drinks they admire so much come from Halfling brewers, who in return offer Dwarves the oak barrels. For their own needs, they produce very sweet wines and tobacco pipes, which are valued in the world as extremely aromatic, and as some say, remarkably improving humour.

Although they don’t look like warriors, enraged Halflings can be dangerous, as exemplified by the relentless troops of Halfling City Guards, patrolling dangerous neighbourhoods in the cities of Humans. They love to compete, often organising fun games and festivities, very rarely missing the opportunities to take part in archery tournaments and various kinds of Olympics arcade.

For many centuries, Halflings participated in great battles only a few times, but these were episodes, which are only mentioned in the old books of the Halfling mages and scholars.

Their lives pass in peace, although sometimes they set off on dangerous trips, which later become the subject of many songs and stories told by the fireplace. Thanks to their travels, other races gained sympathy for them, as Halflings often helped and played with their sense of humour. Many of their settlements were built in alliance with Dwarves, and due to this, the Halflings’ settlements are solid constructions with funny ornaments.

By Krótkins, they are called Mrokins – those whose souls are dark inside. They are not a separate race nor have a nation. They do not differ in anything special from the common representatives of their species. “The Fallen” is every Halfling who has been corrupted to such a degree that other representatives of this race have him in deep contempt.

No one knows why some halflings consciously choose such a life, existing on the margins of their society. The world outside of Bute probably plays a major role here… a world that halflings are not adapted to, a world of deprivation, lies, and lust that they don’t experience in their land.

The fall is not always conscious. It is not uncommon for a person who is generally liked and righteous to finally do something that denies him in the eyes of his people. This is often found among individuals of this race. The reason is that these small people have mental endurance as small as their growth. They easily fall into addictions and descend from the path of law, committing terrible deeds.

Often, the fall doesn’t happen suddenly but mellows for years to once explode and digest the mind of the owner. Other halflings instinctively sense such an individual along with his madness. Most often they run him off their surroundings, fearing that his evil will pass on them and their relatives, which in consequence only brings the fall up. Halfling left alone without the bedfellows is even more subject to the iniquities of the world around him.

Bute is their kingdom, but they often have to leave it, banished for their deeds. Unable to find their place in the world, they wander alone or join various groups of mercenaries. At best, they settle in the lands of Humans trying to live a normal life.

There is a common opinion that fallen halflings are often tormented by various perversions and diseases. This is caused by the false conviction of the confreres that their defectiveness is a punishment for evil hidden in them, which is why ordinary inhabitants of Bute are often banished if marked by some weaknesses. A crookback or a shorter leg can all be enough.

They have to travel to a world that, as it turns out, is more tolerant of small and suffering because of the high diversity of beings. He accepts them with wide-open arms, giving many opportunities to improve their situation, such as sorcery, which offers masking or even partial removal of defects. Halfling, who will follow this path, will seal his fate forever. Not everyone, however, ends up in the hands of dark magic and many become ordinary cutthroats or servants of black knights. Others simply take revenge on their people for the banishment, attacking, and murdering.

Halflings born and brought up outside Bute borders among human cities are more resistant to the surrounding reality. They don’t experience this shock caused by contact with the environment outside their world, and their fall is a conscious choice, a way to an easier life.

They often make it out of the lack of other perspectives or because of ordinary boredom, ending up as fanatical sect worshipers or smugglers trading in an illegal commodity, bought even from Dark Elves. They also do other wicked, but profitable activities. Many of them, due to their small size, are excellent thieves, and stories about killer assassins are well-known around. In addition, there is unconfirmed evidence that the leader of the largest Guild of Thieves in the world is a Halfling.

And so, in this depraved world, one of the most peaceful and gentle races shows its dark reflection…